Dear all I have a problem I have bought this set and I am confused as to which color is used where. can some one help me out please. there is a diagram on the box but it is so confusing. the colours are;
AMMO-F504 YELLOW GREEN
AMMO-F560 KHAKI GREY
AMMO-F561 GREEN VIOLET
AMMO-F562 LIGHT OCHRE
AMMO-F563 BUFF
AMMO-F564 MILITARY GREEN

Hope that helps Andrew. If not, try finding a review of the set or asking Ammo….
T

Tim Marlow said:
Looking at the diagram (which is quite small) I would say they work like this…

Hope that helps Andrew. If not, try finding a review of the set or asking Ammo….
Click to expand...

Looking at the diagram I would agree with Tim.

Member of the Rabble and Pyromania Consultant

I would wait for some one like Paul E to see this or Rick .
There's plenty of stuff on the web, that colour chart is not the clearest by s long way .
T

John Race said:
I would wait for some one like Paul E to see this or Rick .
There's plenty of stuff on the web, that colour chart is not the clearest by s long way .
Click to expand...

That's my problem. done to much research and now totally confused.

Tim is right going by the diagram but looking at the Web I can now see why you are confused, as John said Paul or rick will probably be able to tell you.

Looks like the green violet is supposed to be used for the additional clothing patches and pockets added from canvas.

This site is pretty good for Market Garden period.

and this one is pretty good for earlier uniforms.

The source for authentic, quality reproduction WW2 uniforms and field gear, since 1992.
www.atthefront.com

This is good for general uniform info. 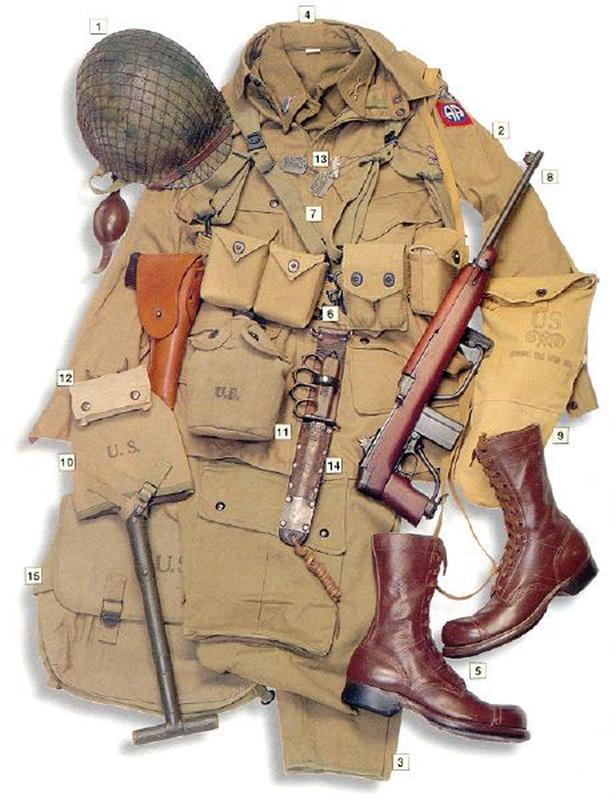 In times of war, armed forces and paramilitaries are required to wear their nation's official military uniforms. While uniforms are mainly used to identify friendly units, they also serve as a camouflage against the enemies.

What I would say though, is that US uniforms went through a rapid flux as the war progressed, starting drab, and ending green. As with all combatants, the uniforms faded and had variation in dye lots, so pretty much anything based on the second, forth, and fifth colours of the pack will work for you.