This is my next build Thunderbird 2.

Thunderbird 2 is International Rescue's heavy equipment transporter, used primarily for missions dealing specifically with the Earth's atmosphere.
It is the transport vehicle for several smaller rescue vehicles held in pods, although its capacity for heavy lifting makes it useful in its own right during many rescues.
The craft's main pilot is Virgil Tracy, who is sometimes accompanied by some back-up crew members including Gordon, Alan, Brains, and even John.
It appears in all but one episode of the Thunderbirds TV series, as well as every movie, making it one of the most iconic Thunderbirds machines of all.

Thunderbird 2 is comprised of two parts: a framed superstructure and a pod. Thunderbird 2's frame incorporates the cockpit, wings, and fuel tank near the vehicle's front, and at the rear the engines and the tailplane, which serves to aid lift and stability. Two stilts are located each at the front and back of the craft to hydraulically lift the craft upward, allowing for the clearing of the pod. Its middle is hollow, to fully accommodate one of the six (total) pods that is required for the mission. Each pod is equipped with undercarriage for a smooth landing for the ship, and contains a huge capacity for storing the rescue vehicle that is needed. The craft is, however, completely capable of vertical takeoff and landing without the pod, but has less integrity this way. 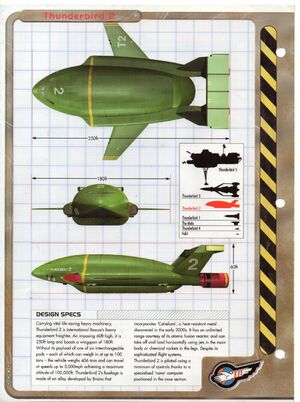 First up was to remove the oversize pilot I then made up 5 new seats with runners plus steering control, also added bulkhead door.

Added missing lights to the top of the Mole and to the front of TB4.

Painted TB2 coockpit, insde the pod and painted the ram jets silver not red as they came.

Drilled out all the small and large stabilising jets then painted silver and fitted main thrusters.

Thank you for looking.
Pete.

Looking great Pete, my favourite of all the Thunderbirds.

Pete,
Loving this I had that cut away drawing as well as a kid I think it was in a Thunderbirds Annual
D

Decals on, repaint legs and fitted.

Made up missing hover jets, front lights and painted.

On to the pod which is going to have TB4 so made up launch ramp and ram.

Will be making small base.
Thank you .
Pete.

Hi made a very quick and simple base, small wooden block, white card which was scored to look like big concrete slabs, painted & weathered, bit rough and ready I know.

(Note to self no more T/Bs to be build, they don't seem to be very popular it's probably down to there size and accuracy)
Thank you for looking.
Pete.

Wonderful Pete. Makes me feel so nostalgic it's almost painful (I had a Thunderbirds suit as a kid - thought I looked the bee's knees).

Please continue with the builds I for one enjoy them.

papa 695 said:
Looking great Pete, my favourite of all the Thunderbirds.
Click to expand...

Hi Ian sorry for the late response, it was my favourite TB too.
Pete.
D

Peter Day said:
Wonderful Pete. Makes me feel so nostalgic it's almost painful (I had a Thunderbirds suit as a kid - thought I looked the bee's knees).
Click to expand...

Thank you very much Peter, I would love to see the pictures

scottie3158 said:
Please continue with the builds I for one enjoy them.
Click to expand...

Cheers Dave much appreciated, I bet there's one or two that whached and built Tracey Island I know I did.
Pete.

Great looking TB2 Pete and cool that it has a TB4 and Mole included.

Fernando N said:
Great looking TB2 Pete and cool that it has a TB4 and Mole included.